Peter Kelly and Pulga Muchochoma in RANKED
POLITICAL MOVEMENT was founded in 2015 out of a desire to create dance theatre that uses a socially conscious creative process. Part of Artistic Director, Aria Evans’ personal mandate is to showcase diversity by representing Turtle Island’s rich cultural landscape. As the founder of the company, Aria is a multiracial, queer, interdisciplinary artist working within dance, theatre and film. Collaboration is a key component to how the company works and the projects undertaken. Building agency and putting the artists before the work are our central values. Constantly asking 'what is political?' POLITICAL MOVEMENT tackles stories and themes that look at social, political and environmental issues. Focusing on building conversations internally and with our audiences about our intersections across difference, POLITICAL MOVEMENT models ways toward the future that we want to be a part of - one that it equitable, compassionate and accessible. 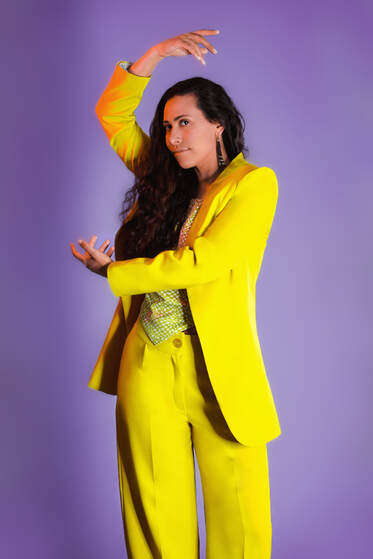 ARIA EVANS (they/she/he) is an award winning, queer Toronto-based interdisciplinary artist working in dance, theatre and film. Aria is a certified Intimacy Coordinator and draws on their experiences of being multiracial (Afro-Indigenous, settler) to capture meaningful social and cultural themes through their interactive art. Collaboration is the departure point for the work that Aria creates with their company Political Movement. Aria was co-Artistic Director of hub14 from 2013-2018 and the Toronto, Ontario and Canada Council for the arts have supported Aria’s endeavours as well as the National Arts Centre, Buddies In Bad Times Theatre, CAHOOTS, Why Not Theatre, Volcano Theatre, Nightswimming Theatre, Jumblies Theatre, Native Earth Performing Arts, Nova Dance and b current. Aria is currently the Metcalf Artistic Director Intern at Soulpepper Theatre Company.

​Aria has sat on Canada Council, Metcalf Foundation and Dora Award juries, been an Invited Guest Contributor to the 20th anniversary Canadian Arts Summit, talked on interdisciplinary panels for CPAMO, the Toronto Dance Community Love-In, CAHOOTS, CADA, TAPA’s INDIEX, DarkNights and On The Move. Aria has also acted as a facilitator and guest curator on behalf of other organizations. Aria’s work in dance film has led them to collaborate with many of Toronto’s leading dance artists and organizations. Aria has taught dance film at Ryerson University, the School of Toronto Dance Theatre, Guelph Dance and for the SummerWorks Performance festival. Aria has done videography and editing for Kaeja d’Dance, RT Collective, Dreamwalker Dance Company, MOonhORsE Dance Theatre, Julia Sasso Dances, Ryerson University, The Banff Centre, Dance Matters, Ella Cooper Creates, Canadian Dance Assembly and the Pulse Ontario Dance Conference, and many more.